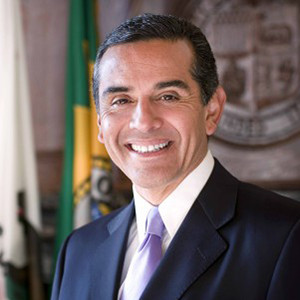 Antonio Villaraigosa has more than 20 years of leadership experience at the highest levels of state government, as Majority Leader and Speaker of the California Assembly, and the highest levels of municipal government as the Mayor of Los Angeles. He’s also made significant contributions in the fields of business, national politics, education, and nonprofit organizations. In recent polls, Mr. Villaraigosa is ranked as one of the three most likely individuals to replace Governor Jerry Brown as the next Governor of California.

From 1994 through 2000, Mr. Villaraigosa served in the California State Assembly as Democratic Whip, Majority Leader and Speaker of the Assembly. As Speaker he presided over operations of the 80-member, 800-plus staff and elected body. He oversaw passage of landmark state measures including an historic $9 billion school rebuilding bond, the largest urban neighborhood parks initiative in U.S. history and creation of the “Healthy Families” program that provided healthcare for more than three quarters of a million children.

Prior to his election as Mayor, Mr. Villaraigosa served as a member of the Los Angeles City Council from 2003 to 2005, where he launched the city’s first program to reduce the cost of prescription medicine for residents, led the Council’s efforts on transportation issues, created new parks, settled two crippling strikes, and worked to expand constituent services in a district of more than a quarter million people.

In 2013, Mr. Villaraigosa finished his two terms as Mayor of the City of Los Angeles. As Mayor, he oversaw the revitalization of downtown Los Angeles and Hollywood; approved balanced budgets of more than $8 billion annually; avoided a municipal financial meltdown during the recession; launched projects to double Southern California’s rail transit system; and set in motion the first major modernization of LAX airport in more than a generation, a $4 billion effort that included the single largest infrastructure project in the history of the city. He also worked to reduce violent crime by 50%, increase high school graduation rates from 48% to 64%, reduce carbon emissions by a nation-leading 28%, and achieve a 75% solid waste recycling rate. While Villaraigosa was mayor, Los Angeles benefited from a 66% increase in tourism and generated more than $40 billion in transportation funding for Los Angeles County.

In addition to his considerable achievements in public service, Mr. Villaraigosa also has served in academia, currently as a fellow at Harvard University and a professor in public policy at the University of Southern California. He is also a senior fellow at the Bipartisan Policy Institute in Washington, D.C. and previously served as a visiting professor at UCLA. Additionally, he works in the private sector with Banc of California and Edelman Public Relations, amongst others, and serves on the McGraw Hill Global Education board of directors. Time Magazine has named him one of the 25 “Most Influential Latinos” in America.