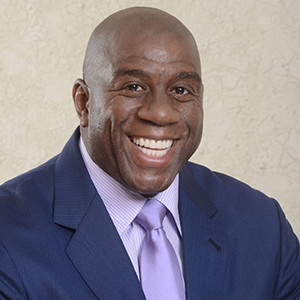 After winning championships in both high school and college, Johnson was picked first overall in the 1979 NBA draft by the Los Angeles Lakers. In his rookie season with the Lakers, he won an NBA championship while taking home the most valuable player award in the NBA finals. Johnson would win four more championships with the Lakers during the 1980s helping to define the “Showtime” era of Lakers Basketball.

Johnson’s career achievements include three NBA MVP awards, nine NBA finals appearances, 12 All-Star games, and 10 all NBA first and second team nominations. He led the league in regular-season assists four times, and is the NBA’s all-time leader in average assists per game, at 11.2.

Johnson is a two-time inductee into the basketball Hall of Fame — once for his individual career and once as a member of the 1992 United States men’s Olympic basketball team (“The Dream Team”), which won the Olympic gold medal in 1992. Johnson was rated the greatest NBA point guard of all time by ESPN.

Johnson has succ essfully parlayed his skills and tenacity on the court into the business world, propelling his company, Magic Johnson Enterprises, to the status of number one brand in Urban America.

In the competitive world of business, Johnson is most noted for his unprecedented Starbucks partnership, which has become a blueprint for corporate America’s engagement and success with urban customers. In 2010, the savvy businessman divested his Starbucks and Los Angeles Lakers shares in excess of $100 million.

As a member of the Guggenheim Partners, a baseball management group (G B M), Magic Johnson became an owner of the Los Angeles Dodgers. Last year, Mr. Johnson, with a number of the partners from GBM, purchase the Los Angeles Sparks of the WNBA, as well.

Johnson also serves as the chairman and founder of the Magic Johnson foundation which is celebrating over 20 years of success and has become one of the most recognizable philanthropic organizations serving Urban America through community empowerment centers and the Taylor Michael scholarship program, among others.

Magic Johnson knows how to win both on the basketball court and in the world of business.