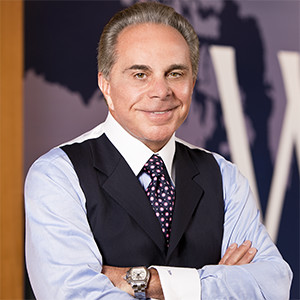 Joe Plumeri is known around the globe for his successes as CEO of Citigroup N.A., CEO and Chairman of Willis Group Holdings, a New York Stock Exchange listed insurance broker, and now, as an influential First Data Board Member. He is also an active philanthropist, having given multi-million dollar gifts to The College of William and Mary and the Make-a-Wish Foundation. He’s the co-owner of the New York Yankee’s Double-A minor league team affiliate, the Trenton Thunder.

Joe’s first jobs included digging sewers in Trenton, N.J., working as a waiter, tour guide, high school teacher, and errand boy at Carter, Berlind & Weill. Joe rose from errand boy to eventually lead billion dollar businesses within a financial empire that would eventually be known worldwide as Citigroup. His path took him to become president and managing partner of Shearson Lehman Brothers in 1990 and, eventually, the president of Smith Barney in 1993.

Joe’s next big step, in 1995, was as chairman and CEO of Primerica Financial Services where he regularly captivated audiences of tens of thousands of self-employed insurance salespeople, inspiring them to help those in their communities capitalize on the growing stock market by buying term life insurance and investing the difference, thereby bringing the American Dream closer for millions of people.

In 1999, when Travelers Group succeeded in its $70 billion merger with Citicorp, creating Citigroup, Joe helped to lead the integration of the two giant companies and was appointed CEO of Citibank, North America, the mainstay financial brand with 450 retail branches across the United States, boosting the division’s earnings by 400%, to $415 million, in just one year.

After 32 years as an executive at Citigroup Inc, he became CEO and Chairman of Willis Group Holdings in 2000. Along the way, Joe revolutionized both his firm and the insurance industry, leading it toward greater transparency, increased innovation and better client service, exemplified by Willis’s now famous “Client Bill of Rights.”

His most memorable feat may have come in 2009, after orchestrating Willis’s $2.1 billion acquisition of rival Hilb Rogal & Hobbs in 2008, when he moved the company’s Midwest headquarters into the Sears Tower. That deal culminated in the building, which is the tallest skyscraper in the Western Hemisphere, to Willis Tower. Today, Chicagoans point to their iconic landmark, the Willis Tower, and remember the day that Joe Plumeri helped to reestablish its preeminence in the American skyline.